25 L plastic tanks can go loose on the deck either in the front or rear of the craft (strapped down) OR we can open the front of the console and slide a tank inside. 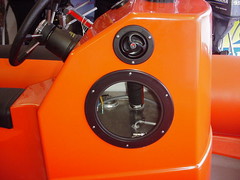 In the image you can see the tank within the console and the filler above the hatch.

In most XS craft the fuel tank is situated within the console, as standard, with a remote filler on the side or the front of the console.  The console size determines the capacity of the tank. 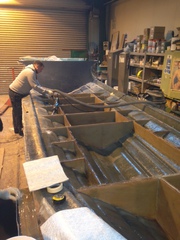 In the image you see a "well" that is formed by 2 of the cross "frames" ending at the lengthways stringer instead of going all the way across the craft.  This area will have the under deck tank placed in it.  capacity can be increased by removing another frame and enlarging the "well" further.

All craft can have the option of an under deck tank.

The installation will be different in each craft depending on internal layout and where the Fillers / Gauge Senders /  Fuel Pickups can be accessed from.

A couple of myths need to be debunked as well as some "givens" re under deck tanks:

1)  Under deck tanks do not lower the CoG as the tubes on the craft negate any effect that moving the fuel 50 cm vertically has.

2)  There is normally less capacity under the deck than in the console.

3)  Due to the greater foot print of the tank the amount of unusable fuel compared to a smaller foot print and taller on deck tank is MUCH greater.

5)  Fuel senders, which are electrical, do not last as long in a damp under deck installation when compared to a well ventilated in console tank.

6)  When a boat is completely swamped there is a greater risk of water ingress in to the tank compared to an above deck installation.

In many instance under deck tanks are a "NO COST OPTION" you just need to be sure that you really do need them !

FINANCE NOW AVAILABLE ON ALL OUR CRAFT

We are open 9-6 weekdays and till 12 pm on Saturdays, call in if you are passing but it is normally best to make an appointment.

SEE WHERE WE ARE

Visit our YOU TUBE Channel 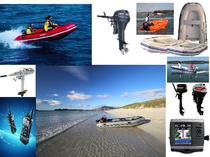 Go to Barnet Marine / BMC WEB SITE For all things NOT XS.